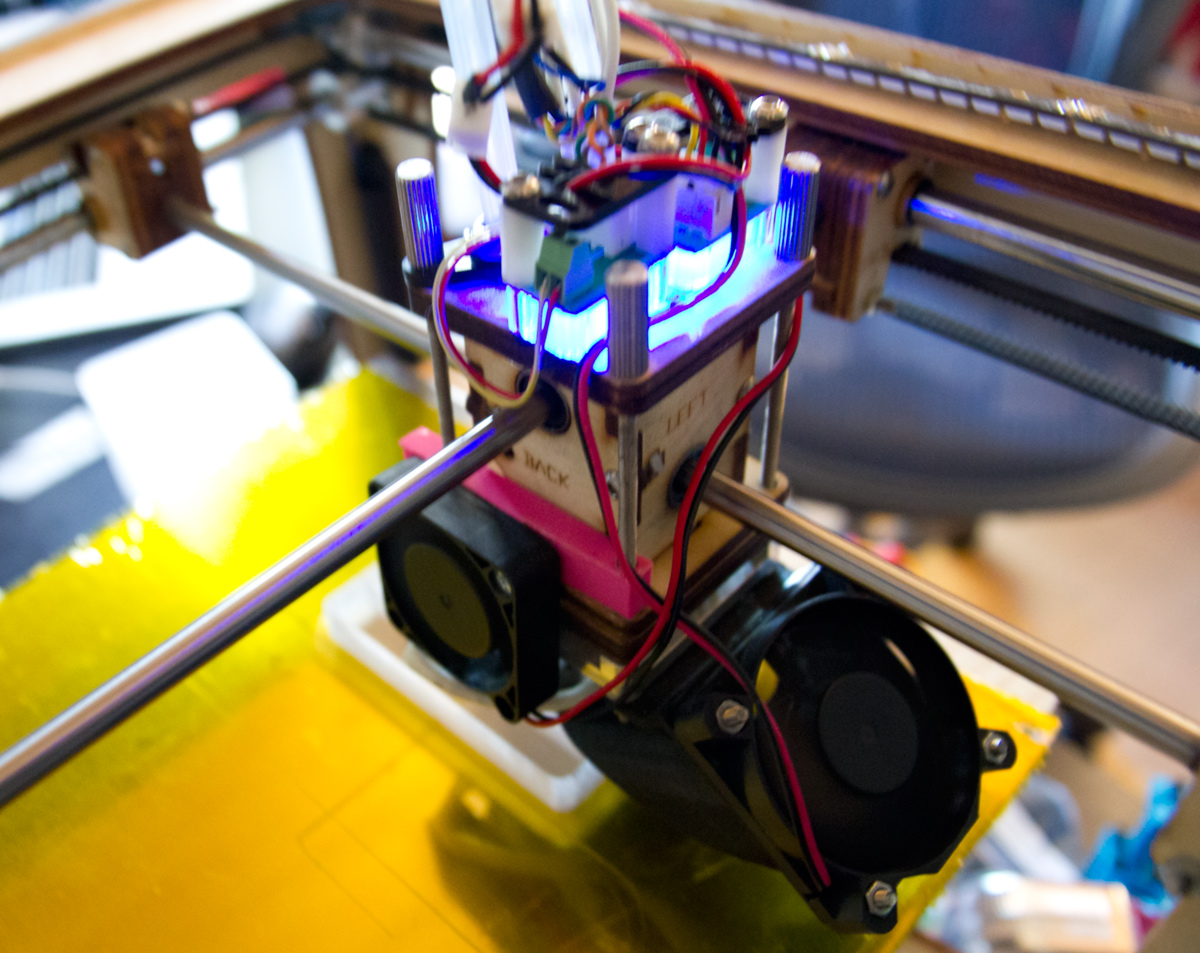 If you have an original Ultimaker and have problems with the extruder getting plugged, I have a couple tricks that has saved me completly from plugs after implementing them.

After buying 7 spools of filament from Colorfabb, I was thoroughly disappointed. I kept getting filament plugs both at the top and bottom of the extruder. I contacted Colorfabb support and over a one month period, we tracked the problem down to two things. The filament were delivered in a cardboard box where small bits of cardboard cutoff from the production process, stuck to the filament. Every time one of these tiny bits of paper got into the nozzle, the paper burnt and plugged the extruder. The other thing is that the Colorfabb filament goes soft at a slightly lower temp than PLA from other vendors, causing it to plug more easily at the top if something is blocking at the tip.

Every time this happened, I had to disassemble most of the extruder and use drill bits and other tricks to remove the plug completely before trying again. Colorfabb has remidied the problem now and all their filament are now delivered in clean cardboard boxes with plastic bags around the filament. They also went really far in compensating me for the troubles I had, so I still recommend them and use them as my primary source of filament on spools. Great customer service always pays!

At the top of the extruder

If the entire extruder assembly runs too hot or you have a partially blocked nozzle, you can get plugs at the top of the extruder (between the peek and the white insulator). You'll spot these easily since you can't push any material into the bowden -> even if you unscrew the nozzle. Some time ago, I built an enclosure around my printer so I could do ABS without it cracking up from the material shrinking. The enclosure holds a nice, steady temperature but the increased temperature also increased the amount of plugs since the aluminium mount above the extruder got really hot and so did the peek part.

I've had plugs here on many occasions, but after adding a small fan that blows cold air onto the insulator, peek & aluminum mount I have not had a single one. You may have noticed that almost all new extruders (from makers like E3D, Makerbot & others) have a separate fan that is cooling the upper parts of the extruder. They probably do this because it's required for the new all-metal hotends, but it certainly helps on an Ultimaker too!

You can download the Fan mount and find instructions at my Youmagine page. It's very minimalistic. At the bottom of the extruder

Plugs at the bottom of the extruder are much harder to prevent once they have happened, so making sure the filament is clean takes you a really long way in this regard. Just print a copy of this filament cleaner, cut off a bit of foam and place it where the material goes into the extruder.

Use these two tricks and you'll probably never ever get a plug again. I havent!