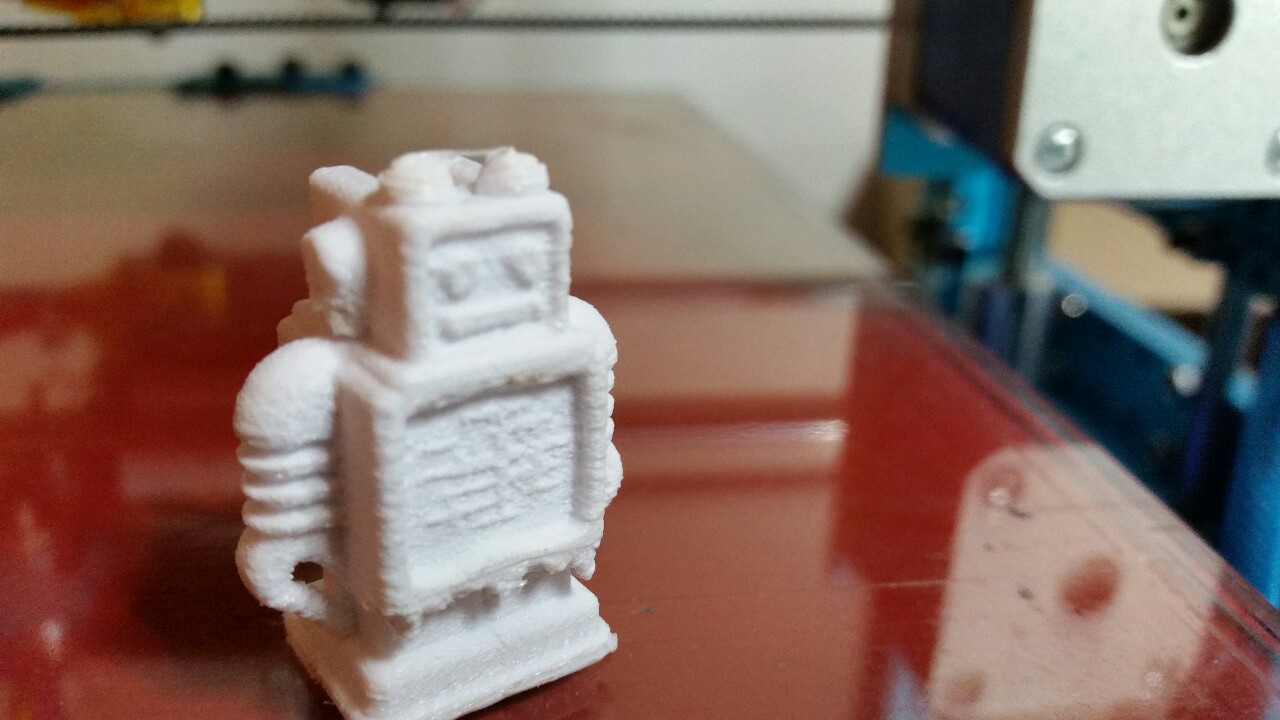 Some time ago I posted some tests done with Colorfabb's XT plastic. I'm guessing that the people from MadeSolid read that and wanted me to test their PET+ filament? I love testing new plastics so of course I said yes to getting some samples!

Just like Colorfabb XT, the PET+ material from MadeSolid is made from PET plastic so I expected the two to be kind of similar. PET is the plastic used in drinking bottles and food containers, so just from that you know it's solid. It's much more solid than PLA as it's not brittle at all. It's stronger than ABS and extrudes at temperatures somewhere between PLA & ABS.

I had actually looked at the MadeSolid materials just the week before as they could offer both transparent, translucent and opaque PET+ filament with a decent range of colors as well. Just last week, Colorfabb also introduced some opaque colors, but at the same time they upped the required temperature from 220-240C to 240-260C making them harder to use for many.

As opposed to Colorfabb, the MadeSolid guys offer extensive printer profiles for their filaments http://madesolid.com/printers It is quite interesting to see as this highlights how differently the various printers are tuned. A Leapfrog printer should be set to 225C, but a Makerbot should be at all the way up to 255C!

I really like how the final prints look. They come out glossy and the material is very easy to work with. There is a tiny amount of warp, but a brim is sufficient to hold things down on the build surface. T-Rex at 0.2mm & UltimakerRobot at 0.005mm. One can clearly see that I need to tune the printer a bit more as I have some "wobbly" somewhere, but the prints look really good despite that.

I received about 5 meters of the clear & 10 meters of the white PET+. With this I printed quite a few tests, but I ran out of sample plastic before I got the settings properly dialled in for my printer. That is - I thought that I had it right, but when exposed to pressure it turned out the layers had not bonded fully?

I did some bonding tests and it seems that on my current Hexagon hotend, I need to go to 235-245C to get proper layer adhesion. Oh well…

The transparent PET+ actually seems a little easier to work with than the XT as I'm not getting these tiny blobs along walls that I do with XT. All the walls of the Raaco resistor-box came out looking perfect and the final print is so solid that I need pliers to damage it. When reflecting a light-source it also appears to be more shiny/reflective than the XT, though the transmissive properties are very similar. Bridging was interesting. I had a model that has a decent bridge. It's 29mm so I didn't expect that to work, but initially it looked to be going well. Then the plastic started smearing onto the nozzle and things became really ugly. I set the print to pause, cleaned it up and kept running at a higher speed. That turned out to be a bummer. After a lot of cleaning, I realised that going slower was the best. Next time I'll use Slic3r instead of Cura so I can tweak the speed for bridges. The print came out fine in the end and I was really impressed by how easy it was to remove the supports? That was of course related to the poor layer adhesion that I discovered later, but after testing some more it seems to be just as easy to remove PET-based support as it is to remove ABS.

I am really liking this plastic, so I just purchased some rolls with the translucent colors (red + blue) as well as opaque white. I wish that MadeSolid had more colors available (like translucent & opaque yellow, orange, purple & more), but I guess that'll come with time.

Next up for this weekend is testing flexible filaments. I have two rolls of NinjaFlex as well as "transparent rubber" from the Italian company PlastInk. Should be fun!

The BAM Makeblock printer has a BulldogXL extruder with a Hexagon nozzle. I use the following settings with PET+:

Just days after I sent my order, MadeSolid published a lot of new colors. Now they have 15 different colors to choose from. Pretty good!