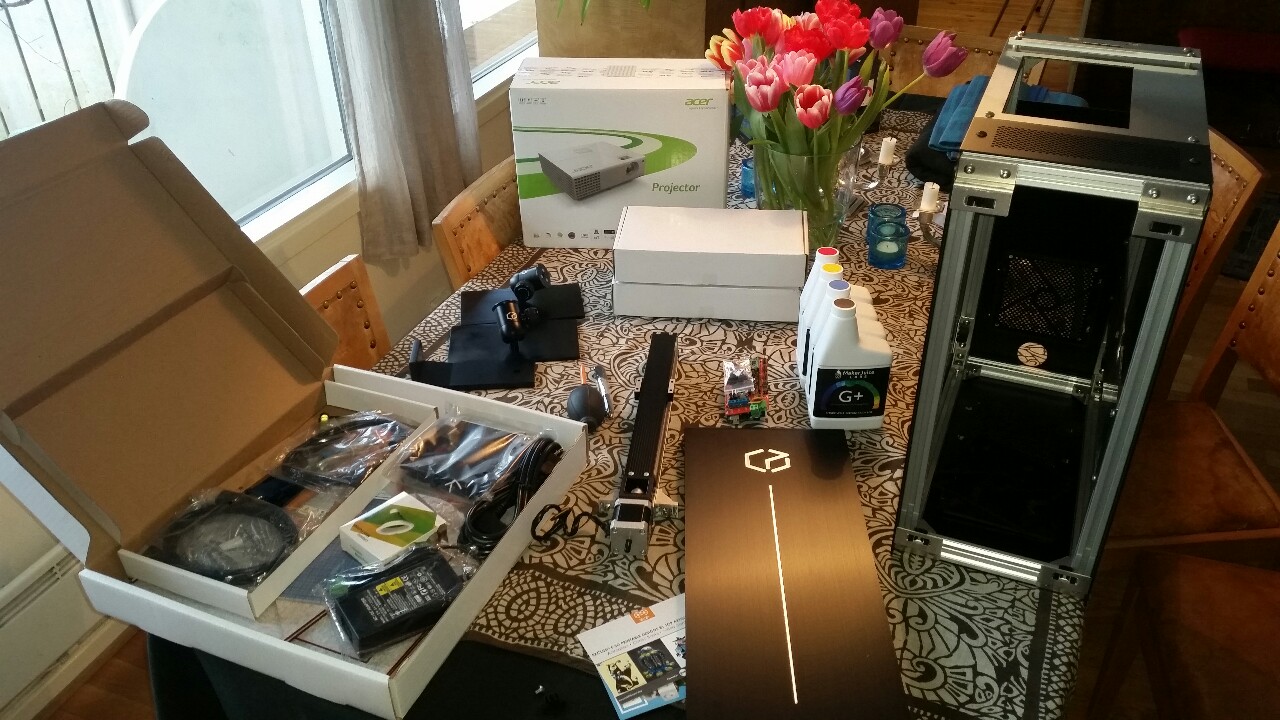 I just received my fourth 3D printer and the first to use SLA technology. I've followed maybe ten 3D printer projects on Kickstarter, but Titan1 is the first one where I have actually ordered a device. On the other one's I've just been part to follow the project and see if they're posting “the right things” and this was the first vendor to gain my trust. As opposed to most other KS printers, the people from Kudo3D kept posting different reviews of materials and showcased prints.

But without any further ado - here's my unpacking of the printer!

I received two boxes and for once it was actually true that they didn't fit inside my rather large mailbox. The smaller box contained the printing resin from MakerJuice. The big one contained the printer itself in a nicely packaged box. The upper layer had slots for the Z-stage, two brackets, the RAMPS & some tools. Beneath this upper layer was the printer-case itself along with a white box containing tools, cables and the red acrylic enclosure: The printer enclosure was jammed full of other boxes that fit snugly. I pulled it all out and spread it across the table and here's what the different parts are (click to enlarge): 10. 12V/5A power supply
11. Red tape for joining the acrylic pieces
12. American Power cord? Oh well, I have one spare but this one had actually been damaged (pins displaced)
13. Tiny foldable funnel
14. Spare mounting brackets for the T-slot case. One of these + a screw had come loose during transport.
15. Case fan
16. Calibration Ruler
17. Parts for the red, acrylic enclosure
18. "Leveling feet", a fancy plate consisting of a sandwitch of plastic & metal.
19. Hex wrench for case
20. Knob
21. DB9 serial cable extension
22. Feet for the case
23. Flush cutter. Looks good!
24. Tweezers & a stanley knife blade. No knife though?
25. Triangular level
26. Metal spatula
27. Nuts and bolts
28. USB to Serial cable
29. HDMI cable for the projector
30. USB type A cable

I'm really looking forward to get this up and running over the weekend. There should also have been a UV lamp in the package to use when curing the prints as they come put of the printer. I'll email the support dept and check where that one has gone. As usual there's more pictures on my Tumblr page.

Postscript: I ended up using the projector in the Titan for video instead of 3D printing. The process is simply too messy and hard to nail down. In 2018 it’s still a little like this unless you buy a Moai or FormLabs machine that comes with decent software.