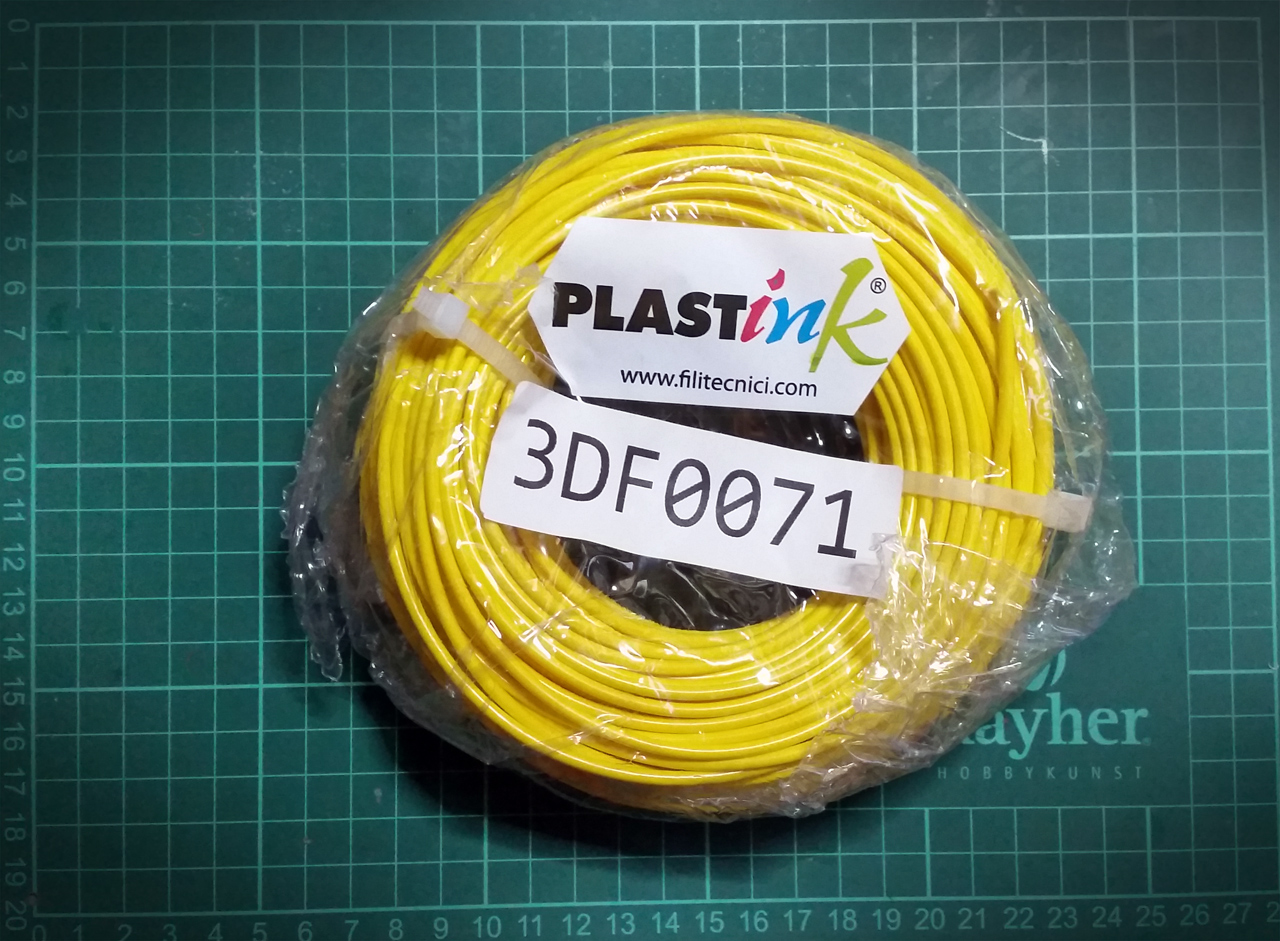 This flexible plastic filament from the Italian company PlastInk has been on my desk for a while and it's quite interesting! It's flexible, has massive friction and behaves like Nylon in many ways.

They actually don't call it plastic, but rather rubber. I wouldn't say it behaves like Rubber in any way, but it has some properties that make the comparison valid. The plastic prints with a nice shine and I've not experienced any dimensional deviations (2.85mm).

How Flexible is it?

The Flex is nowhere near as flexible as NinjaFlex. NinjaFlex will typically go back to it's original shape, but while this plastic stretches, it will loose it's shape if pulled really hard. It can stretch to 2-3 times it's own length before breaking, but actually breaking it is really difficult as it's super strong! It is so strong it's hard to cut the 3mm thread with just scissors and in this regard, it is quite comparable to Nylon. It's actually so solid that proper pliers are required!

It bends nicely, so it's not rigid like PLA & ABS, but is also extremely solid. I'd say it behaves something in between PETG and Ninjaflex, but more towards the PETG side. It's very different than PETG though. It has such an extreme friction that you have to spool it so it feeds nicely into the printer. If you don't, the plastic will get stuck in all possible parts of the printer. It simply must be on a spool as it doesn't slide - even on a hard surface. This frictional property is quite unique and makes it a good choice for printing grips and tool handles. This is also how it compares the most to rubber.

How does it print?

When spooled, this filament is very print-friendly. It can be almost as strong as Nylon, but it's more flexible. It can go fairly low in temp and does not warp very much. It is however rather hard to make large prints stick on glass with glue, so you'll have to use the heated bed & print with a brim so that the heat sucks it down. I've printed this rim with several plastics. It's a good test-object as it has both solid and flexible parts. In PETG it's hard. In Nylon it can flex a bit but is quite hard. In Ninjaflex it is uselessly soft. With Plastink - it's something in between the NinjaFlex and Nylon. Thicker parts are stiff, but thinner parts are rather flexible. I still think Nylon is right for the rim's, but I like how the Plastink plastic feels! Very little stringing overall. It's also interesting to note that this filament does not require you to print slowly like NinjaFlex does. Despite it's frictional properties, it's stiff enough to print with bowden systems as long as the tube is Teflon / PTFE.

One important thing I found out is that you can actually torch this plastic with a burner to get a smoother surface. You'll need to be careful doing this as it's very easy to apply the flame for too long, but if done carefully you can get some quite smooth results. Applying acetone to it seems to do very little. I put a sample in a small bottle of acetone, and there's no sign of it dissolving in any way. I can't seem to find a datasheet for the material, but it would have been really interesting to see what this is based on given it's resistance to acetone. Skatefins printed with Plastink's white Rubber - seemed like a great idea for solidity, but the frictional properties really work against it being suitable.

I initially got a couple small samples from the vendor, but found it so interesting that I wanted to test some more. I found an extra roll in the Arduino.cc webshop and picked it up with some other original Arduino gear I needed.

The filament from Plastink comes in just 7 basic colors (Black, Blue, Red, Green, White, Yellow & Clear), but the exact same colors exist for Flex, PLA & ABS. This is very interesting when thinking about multi-material objects as you can make parts that look like a solid, single colored part, but has elements that can flex. I especially find the Crystal (transparent) rubber fascinating even though I have not tried it yet.

I was also sent samples of the PLA & ABS. I only tested the PLA and it behaved nicely, just like other high quality PLA I have. They've also just launched a series of metallic colored PLA that looks interesting. Despite a loack of information regarding the origins of the plastic, I just got an email that suggested that the plastic is produced by Aquilacorde.com - a manufacturer of guitar strings. That could explain the nylon-like properties & strength.

The BAM Makeblock printer has a BulldogXL extruder with a Hexagon nozzle. I use the following settings with this material: