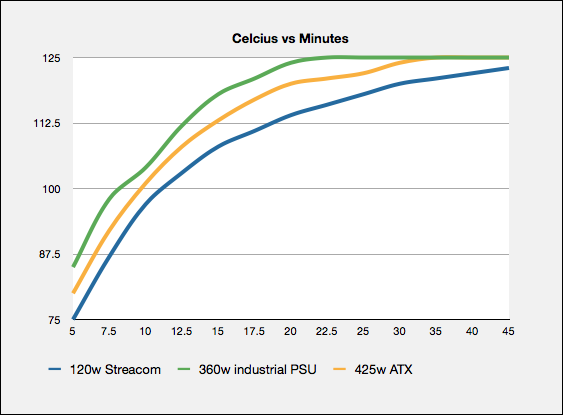 I couldn't reach the temperatures I wanted for printing ABS using my MK1 heated bed. The MK1 is a PCB with fat copper traces and simply running power through it makes it heat up due to the resistance of the metal. For ABS to stick properly, I need the heated build surface to reach about 120 Celcius within reasonable time. Today I've tested three different solutions and written up the results in a spreadsheet. The graph above actually makes sense even though you would think that the 425 watt computer PSU would be better than the 360 watt industrial PSU.

The reason is that the KDM 1U 425 power supply isn't really 425 watt. It's split into two "rails" - each with something like 212 watts. This is apparently common for computer PSU's. I asked KDM if I could "pool" the two outputs, but they advised against that. Depending on construction, that can make the PSU unstable to such a degree that it burns and I don't want that… Another thing is that the KDM does not turn the fan on when needed. Not a good sign!

Based on the above I'll use the 360 watt PSU for now. Only drawback is that it's from China and not CE certified. It still seems better built than the KDM though as it turns the fan on when needed. I won't be printing ABS without watching over the machine. I'll also stay with the relay approach even though other users with heated beds don't think it's required. They are probably right, but keeping it won't hurt? I like this extra layer of abstraction and I'll still keep the original (external) PSU to drive the Ultimaker itself. The new PSU is 5 cm tall, so I'll need to print some "legs" for the Ultimaker to ensure proper airflow.